Domestic violence and impact of Coronavirus

Living in an interesting time, and our life today can certainly be called interesting, is becoming less and less interesting from the perspective of ordinary everyday life and the quarantine that brings challenges modern man has not encountered until now. In addition to geopolitical bidding of major powers (US, Russia and China) and threat to the unquestioned US leadership position, universal networking and globalism, exploding use of the Internet, new media and communication channels, and threat to liberal democracy by populist movements and parties across Western democracies, the pandemic and the fight against coronavirus came as a test of the successful operation of countries (if not humanity). Here, we will not look at the economic and health aspects of the pandemic that are the most pronounced, but rather the functioning of individuals, families, and society in a time of self-isolation, quarantine, and a way of life that was unimaginable up to now, and which could last for at least three more months or even longer.

The idea for this review arose through interviews with multiple police officers in the Zagreb area during March 2020 and the onset of self-isolation and social distance measures, which led to the realization that there was a significant increase in citizen reports of violence and bullying between neighbours in buildings, and between family members, with no specific reference to vulnerable citizen groups. In addition, a daily newspaper article also referred to the fact that there has been a significant increase in violence in France since the introduction of coronavirus control measures (Novi list, 2020). An evening news broadcast on the topic revealed that 237 cases of domestic violence were reported to the police in the Republic of Croatia in the period from 19 March to 31 March 2020 (Rtl Direkt, 2020). On this occasion, I did a mini-research in open source and noticed a similar issue being extensively reported in other countries as well.

Worldwide, as cities introduced measures to stop the spread of coronavirus, massive life-saving efforts have put one vulnerable group at risk. Women and children living with domestic violence do not have the opportunity to escape from their abusers during quarantine, and from Brazil to Germany, from Italy to China, activists and survivors say they are already seeing an alarming increase in abuse (DW, 2020). According to the World Health Organization, every third woman in the world experiences physical or sexual violence, making it “the most widespread but among the least reported human rights violations." But during times of crisis – such as natural disasters, wars and epidemics – the risk of gender-based violence escalates. In China, the number of domestic violence cases reported to local police in February tripled compared to the previous year. Activists say it is the result of a forced lockdown (Time, 2020). It has been pointed out that the losers in this battle against coronavirus are those who have insecure jobs, those with pre-existing health problems, and those incarcerated with their partners who abuse them. One could argue that the lack of control over household income during a coronavirus epidemic could trigger an outbreak of domestic violence. Moreover, the victim often has nowhere to go because she is imprisoned with her abuser – so injuries and traumas are likely to be worse. Domestic abuse, whether reported to the police or unreported, is expected to increase significantly during the isolation; care and shelters for victims will be less accessible due to coronavirus concerns; legal and economic assistance to victims will be less available due to reduced funding, other priorities and economic downturn. Given that the number of domestic violence cases has tripled in some areas near Wuhan, China, there is no reason to believe that the situation will be different in other parts of the world (Moutafis, 2020). At least 196 million Americans have received a message these days that while the coronavirus is spreading, the safest place for them is home. But for too many of them, home is actually dangerous. Each year, more than 10 million Americans experience domestic violence, and experts fear that the pandemic and isolation needed to fight coronavirus could increase that number (Vox, 2020). 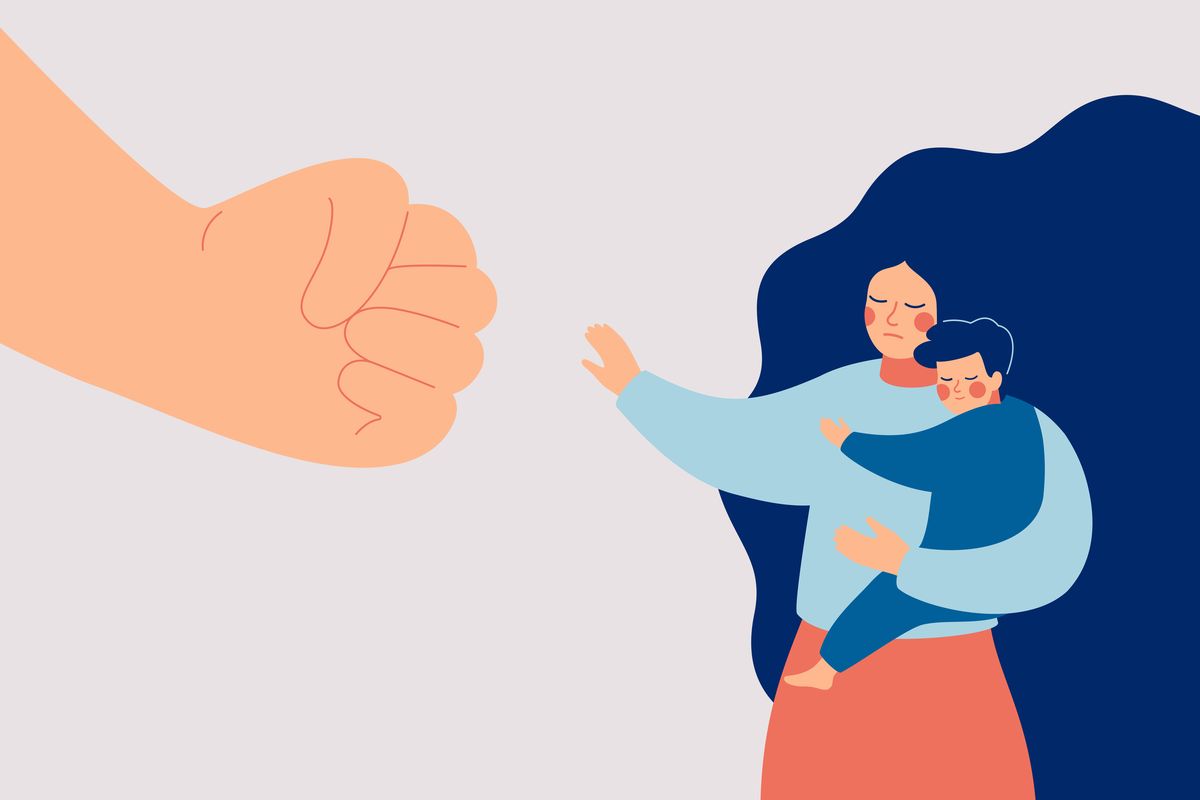 For the World Health Organization, it is clear that natural disasters exacerbate domestic violence (WHO, 2005). And while the coronavirus outbreak is not an earthquake or tsunami, economic and emotional distress could have a similar impact on individuals.

For example, after hurricane Katrina in the United States, data on physical violence increased by 98%. The percentage of women who reported psychological victimization increased from 33.6% before the hurricane to 45.2% after the hurricane. The percentage of men reporting psychological victimization increased from 36.7% to 43.1%. Physical victimization reports increased from 4.2% to 8.3% for women, while they were not changed for men. Significant predictors of post-Katrina victimization include pre-Katrina victimization, age, education, marital status, and hurricane-related stressors. Data from the first population study that documented intimate partner violence after a large-scale natural disaster suggested that it could be a significant but often neglected public health problem after disasters. (Schumacher et al., 2010). In countries similar to Australia, relationship violence increases in the wake of disasters. New Zealand police reported a 53 % rise in domestic violence after the Canterbury earthquake. Interviews with 30 women and 47 workers in Victoria after the 2009 Black Saturday bushfires (It caused 173 deaths, injury to 414 people, the destruction of 2 030 houses and subsequent relocation of 7 000 people) provided evidence of increased domestic violence, even in the absence of sound quantitative data and in a context that silenced women. Community members, police, case managers, trauma psychologists and family violence workers empathised with traumatised and suffering men-men who may have been heroes in the fires-and encouraged women to wait it out. These responses compromise the principle that women and children always have the right to live free from violence (Parkinson & Zara, 2013).

Based on WHO definition, violence was splits into three broad categories, i.e., self-directed violence; interpersonal violence; and collective violence. Self-directed violence includes suicidal behaviour (i.e., suicidal ideation, plans, attempted suicide, and suicide). Interpersonal violence by itself divides into two categories, i.e., family and intimate partner violence (e.g., child abuse, violence by an intimate partner and abuse of the elderly) and community violence (e.g., youth violence, rape or sexual assault by strangers and violence in institutional settings). Collective violence includes wars and armed conflicts within or between states, genocide, and terrorism (WHO, 2002). Although the appearance of coronavirus cannot be equated with natural disasters, taking into account the consequences it causes and the current way of combating the pandemic, it can easily be concluded that in relation to violence and psychological condition, appearance of coronavirus has more similarities than differences with natural disasters. For the purpose of all this, there is an interesting chart below that shows the repercussions of natural disasters on the lives of individuals and the possible consequences. 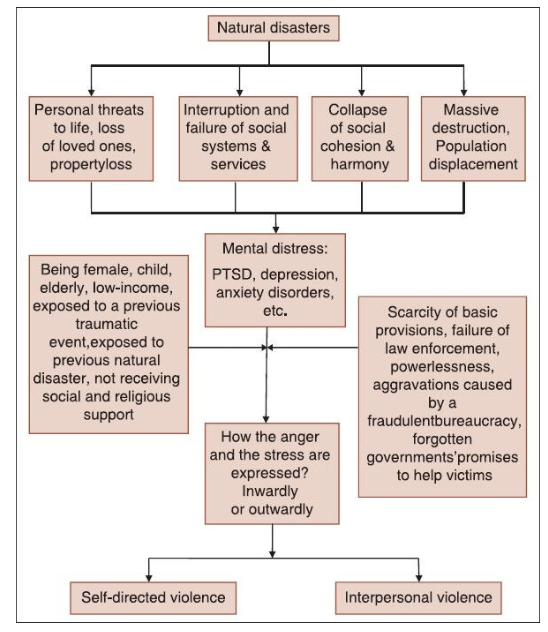 With regard to a natural disaster (and this may also refer to pandemic repercussions), the key thing is how exposed population responds to these pressures, either internally or externally (Rezaeian, 2013). In conclusion, it could be emphasized, in line with the IFRC’s recommendations on disasters, that a general challenge to the humanitarian community is to prevent gender-based violence (Gender Based Violence), and also to establish an effective response when it occurs. This implies that those responsible should be made aware of the possible risk factors and become susceptible to GBV during prevention, as well as the readiness to react and invest effort during recovery (IFRC, 2015). Although there is too little research on violence that can be fully identified with the current status of the coronavirus pandemic, the existing research referring to natural disasters signal increased risk for people exposed to domestic violence. Therefore, it is necessary to raise awareness of the existing social problem and to find effective mechanisms that would provide the much needed security and protection to vulnerable persons.

Rezaeian M. (2013). The association between natural disasters and violence: A systematic review of the literature and a call for more epidemiological studies. Journal of research in medical sciences : the official journal of Isfahan University of Medical Sciences, 18(12), 1103–1107.