Children are the most vulnerable members of society. The maltreatment of children, including neglect and various forms of physical, sexual, and emotional abuse, endures as a societal problem of significant scope (Putnam-Hornstein & Needell 2011). According to the data from the World’s Health Organisation, nearly 3 in 4 children (300 million children) aged 2–4 years, suffer physical punishment and/or psychological violence at the hands of parents and caregivers on regular bases (WHO, 2020). A well-known fact in criminology is that a child who was abused is more likely to become an abuser himself (Spatz Widom, 1989; Dargis, Newman & Koenigs, 2016; Middleton, Sachs & Dorahy, 2017). Therefore, protecting children from maltreatment in their early age, provides the possibility of creating better people and a better society for the future, and by doing so creates a positive multi-generational impact. In 17th century, states and municipalities identified care for abused and neglected children as the responsibility of local government and state itself (Pecora et al. 1992) and little by little, the child welfare system started to build. Child welfare is a set of government services designed to protect children and encourage family stability that includes investigation of alleged child abuse and neglect (“child protective services"), foster care, adoption services, and services aimed at supporting at-risk families in order to keep the family members together.

In 2019, Croatia was shaken up by the case of a father who threw his four minor children of the balcony at the house where they live. As many times before, the public has repeatedly directed its anger at the Centre for social welfare. Regardless of the fact that the family was under the supervision of the Centre, everyone wondered: how did they miss it?

A similar tragic scenario happened a couple of years ago in California. 8-year-old Gabriel Fernandez was abused and tortured over a period of months that ultimately ended in his fatal beating in 2013. His mother and her boyfriend, were both charged and convicted of first-degree murder with special circumstances of torture. Throughout eight months, the child was abused and multiple people reported signs of abuse to social workers. However, Gabriel was never removed from the household. This led to several concerns over the effectiveness and efficiency of social services in Los Angeles County, and ultimately led to four social workers being criminally charged in Los Angeles Superior Court. Although it is impossible to predict human behaviour and there are a lot of unrealistic expectations of social welfare system, every state has the obligation to support families, protect children and prevent child abuse. However, in order to do so, we must seek for the best solutions and best with the firmest scientific background. Therefore, examining both quantitative and qualitative data is extremely important and helps policy makers to scientifically detect key challenges and risk factors in order to maximize support and serve young children involved with child welfare services in the best way possible.

California Child Welfare Indicators Project (CCWIP) is a project that strives to encourage data transparency and accountability. It is in fact a collaborative venture between the University of California at Berkeley (UCB) and the California Department of Social Services (CDSS). The project is housed in the School of Social Welfare, and provides policymakers, agency staff, researchers, and the general public with access to critical outcome information on California’s child welfare system (CCWIP, 2020). CCWIP receives extracts from the state-wide child welfare system and disseminates aggregate reports that are made publicly available in order to provide a comprehensive source of child welfare administrative data. CCWIP provides a comprehensive source of child welfare administrative data, and serves as a model for an open-data and information dissemination. CCWIP also provides policymakers, child welfare workers, researchers, and the general public with access to important information on California’s entire child welfare system. Users can examine child welfare performance measures over time, across counties and demographic groups. In addition to stratifications by year and county, data can also be filtered by age, ethnicity, gender, placement type, and other subcategories on topics of interest (CCWIP, 2020).

The data shows that young children, especially infants under the age of 1, enter foster care at disproportionately higher rates than any other age group. Infants under the age of 1 also suffer from the highest maltreatment allegation rates. Additionally, they tend to have longer stays in foster care, but they will eventually achieve permanency through reunification, adoption, or guardianship at higher rates than their older counterparts. 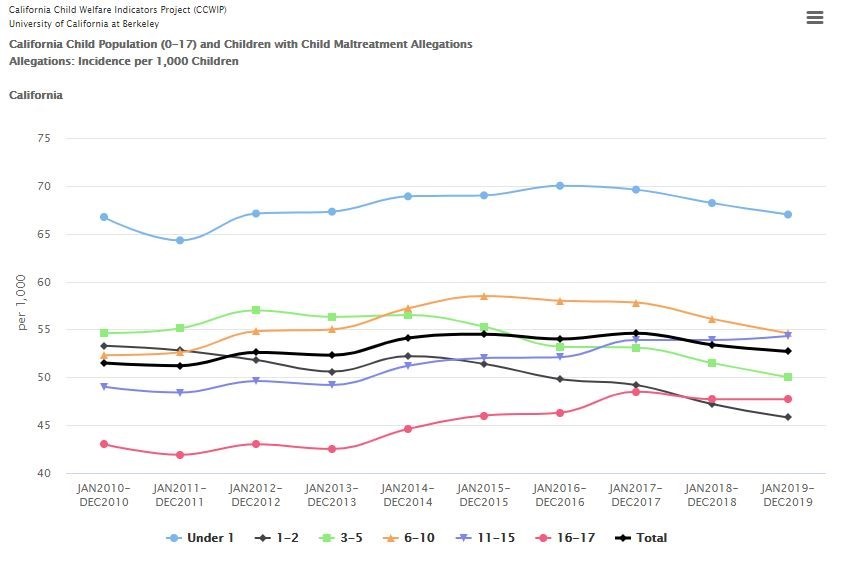 The graph was retrieved from the official webpage of CCWIP (Child maltreatment allegation rates 2010-2019, available here.) 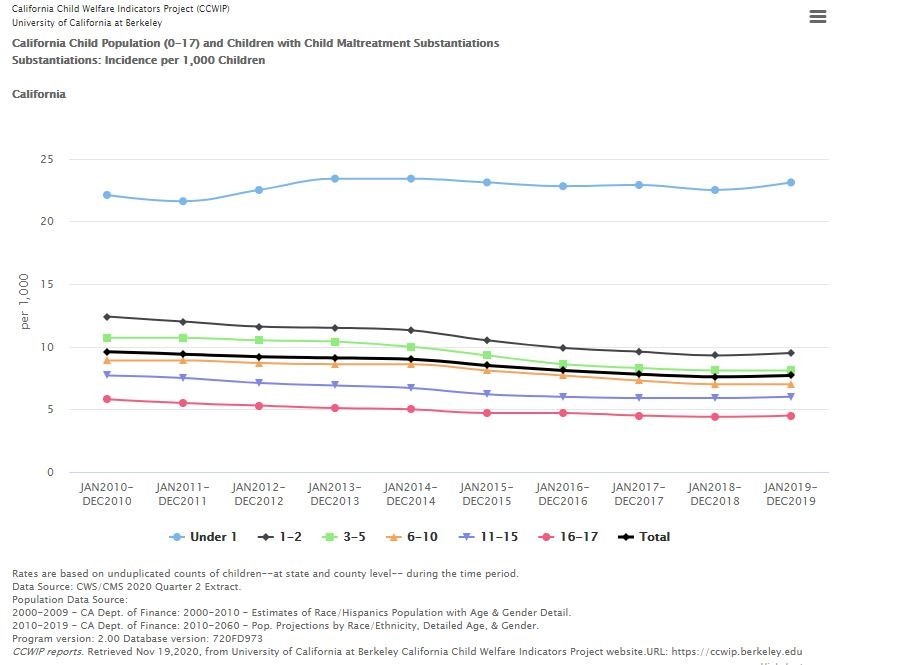 Violence Research Lab talked to Daniel Webster, the Principal Investigator of the California Child Welfare Indicators Project at UC Berkeley, who explained that these data trends are observed in California and in states across the nation since infants are among the most vulnerable children, and understandably draw acute attention from members of the community. Heightened rates by age group are also observed when children start school in USA (about age 6) and then again in the teen years. It is clear that there is a certain disproportionality and disparity in child welfare system involvement because besides age, a longitudinal data also shows differences in maltreatment rates and child welfare system involvement when looking at child’s race. In the United States, data suggests that a disproportionate number of minority children, particularly African American and Native American, enter the foster care system. 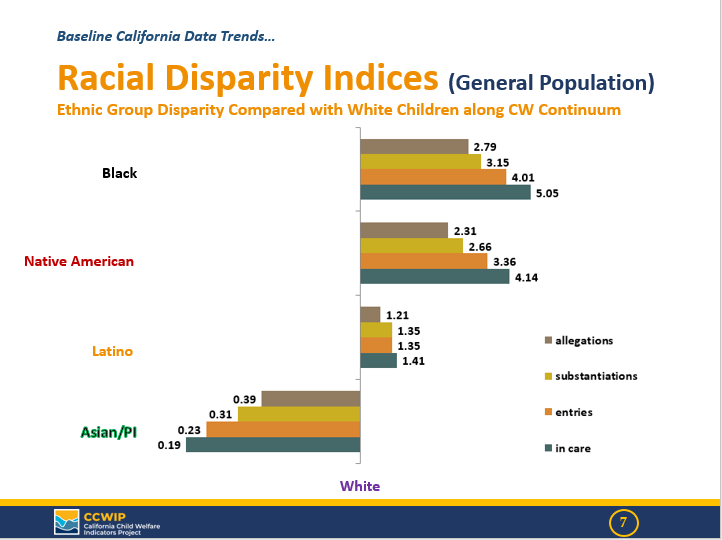 The annual rate of removal in the USA is around 4 per 1000 (source). However, when adding the race variable, certain groups such as African American and Native American children tend to have higher rates of maltreatment allegations, substantiations, and increasing levels of system contact. There are also large differences in system contact rates when taking child age into consideration, with infants having the highest rates.

Further, it is important to note that when rates of system contact are viewed over the course of childhood (i.e., across an 18-year span as opposed to discrete annual rates), the magnitude of child welfare involvement is much greater (Wildeman et al., 2014). Recent work along these lines examined a California birth cohort and found that about 5% of the children entered foster care at some point during childhood (Magruder, Shaw, & Webster 2019). For African American children this rate is about 13%. The rates are even higher when lesser degrees of system contact are examined, with about 10% of kids who will be the subject of a substantiated maltreatment allegation in their childhood, while this percentage for African American is about 20%.

In Croatia, despite maltreatment allegations, judges are very reluctant to remove children from their abusive parents (Čop & Svalina, 2015; Dojčinović, 2014).

We asked Webster to comment claims that child abuse would grow to be much higher than it regularly is during the pandemic. Even though there are no reliable data for 2020 as of yet, newspapers keep writing about reports going down, children being more exposed to domestic violence and cases such as this getting under the radar in times of COVID pandemic. Webster confirmed that the total number of children who are the subject of maltreatment allegations has gone down, and that is largely driven by decreased numbers of reports from education professionals due to children not being in school during the lockdowns. However, despite the fact that referrals went down, Webster counsels that we need more time and more data in order to make a reasonable estimation of whether actual maltreatment rates have increased in the population during the pandemic or not.

Improving the child welfare system through big data, as well as tracking children who enter the social care through their childhood and making the data publicly available, is a worthwhile endeavour. The collaboration between CCWIP and the California Department of Social Services is a promising example of a university-public child welfare partnership that has successfully brought practical challenges, key critical hotspots, disparities and important risk factors in child welfare system to consciousness. Croatia should try to follow this example and use the available data as a tool to prevent, recognize and define child abuse, as well as to provide support and help to the families in need.

*We thank Daniel Webster for his valuable input and review of the text in hand.