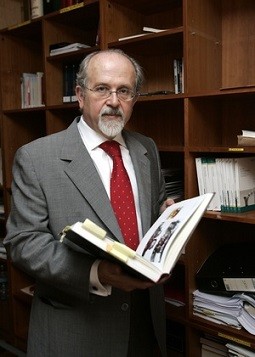 Prof. Dr. h. c. mult. Luis Arroyo Zapatero is criminal law professor and the Director of the Institute of European and International Criminal Law at the University of Castilla‐La Mancha, of which he is Rector Emeritus. Since 2002 he is President of Société Internationale de Défense Sociale with headquarters in Paris and Milan.

Born in Valladolid in 1951, he studied at the Law Faculty of the University of Valladolid and concluded in 1974 as outstanding and with extraordinary prize. With a fellowship awarded by the DAAD he pursues post‐doctoral studies at the Institute of Criminal Sciences of the University of Cologne, from 1975 to 1977, next to Prof H. J. Hirsch, as well as at the Institute of Criminology and Economic Criminal Law at the University of Freiburg next to Professor Tiedemann, with a fellowship awarded by the Council of Europe. Since 1977 Criminal Law Assistant at the Chair of Prof. Marino Barbero Santos at the Complutense University of Madrid, where he received his doctorate in 1980, cum laude with a thesis on“Responsibility for the crimes committed by reckless omission in occupational accidents”,which earns the award of the Foundation of the Chamber of Commerce and the Universities Madrid. Tennure Professor of criminal law at the Complutense of Madrid University since 1982. Professor and Founder Dean of the Faculty of Law at the University of Castilla‐La Mancha in Albacete, 1985. Rector of the University of Castilla‐La Mancha, a position he heldafter successive elections from 1988 to 2003.

Prof. Dr. h. c. mult. Luis Arroyo Zapatero was awarded with the Medal of Honor by the Complutense University,1995; Gold Medal of Castilla La Mancha, 2006; the Cross of Honour of St. Raymond of Peñafort by the Ministry of Justice in 2007; Fellow and Gold Insignia of Alexander von Humboldt Foundation 2010. He holds the titles of Doctor Honoris Causa from the University of San Cristobal de las Casas, Chiapas, Mexico, January 2000; from the Federal University of State in Rio de Janeiro. April 2004, from the Kennedy University of Buenos Aires, Argentina, August 2005, from the University of Morón, Argentina, April 2008 and from that of Targoviste in Romania in April 2009. Member of the Board of the Ortega y Gasset‐Marañon Foundation, of the Natural Heritage Foundation and the Royal Foundation of Toledo. He was Chairman of the Board of the National Park Las Tablas de Daimiel, 2007‐2011.