Reflecting on the past year, there is a type of a violent act that was, arguably, one of the most discussed ones. That is the issue of mass shootings in the USA. In fact, reports suggest that by November of 2019 there were more shootings in the USA than there are days in the year (source). This information on its own sounds incredibly alarming, especially since people, whenever they hear the term “mass shooting in the USA”, immediately think about tragic events such as the “Sandy Hook” shooting with over 20 deaths, predominantly children. However, Gun Violence Archive (GVA) defines mass shooting as an incident in which at least four people are shot, excluding the shooter (source), and as such doesn’t have to include any casualties. On the other hand, the FBI defines mass murder as any instance in which at least four people are killed, and in the year of 2019 there have “only” been 41 mass murders in the USA (source). Nevertheless, one should be careful with comforting themselves with the fact that from 417 mass shootings “only” 41 had enough casualties to fall under the category of a mass murder, for those 41 shootings translate to 211 life lost. 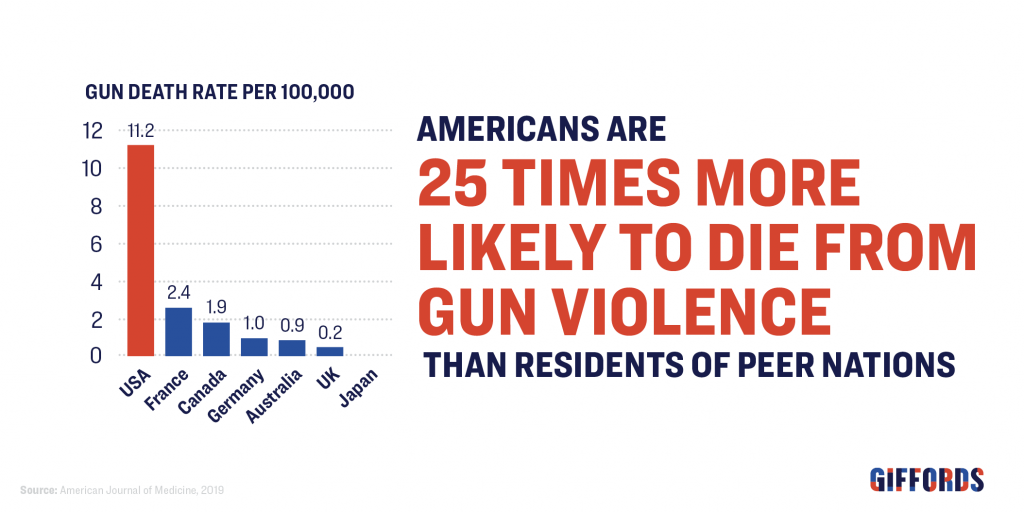 Whenever an issue like this occurs, and especially when it happens in a country as developed and as progressive as the USA, the main question that arises is “Who is to blame?”. Answer to this question usually depends on who is asking, who is answering and when is it asked. Some blame the government and the gun control, some ‘those violent games the kids play these days’ while others put the sole blame on the shooter himself. However, from the psychological point of the view, the main question should be “What is the cause?”, for there is a core belief in psychology that by understanding the cause of a problem, one has a greater chance of preventing it from happening in the future. And the prevention of this kind of tragedies is, or at least it should be, the main goal. In order to do that, it is wise to “go back to the start”. What is the cause of violent behavior itself?

The most “simple” explanation of aggressive behavior, and one of the most commonly used ones, is “aggression as learned behavior” theory. Based on this theory the aggressive behavior is something that children learn from their parents, role-models and society in general. In the case of the shooters, this kind of behavior is something they were “taught” as the most “appropriate response” in a specific situation. It is this theory that is most commonly quoted as an argument for not mentioning the names of the shooters when reporting the incidents as well as not reporting on the shootings at all. Based on this theory, if people don’t see this kind of behavior, they are less likely to try it themselves. 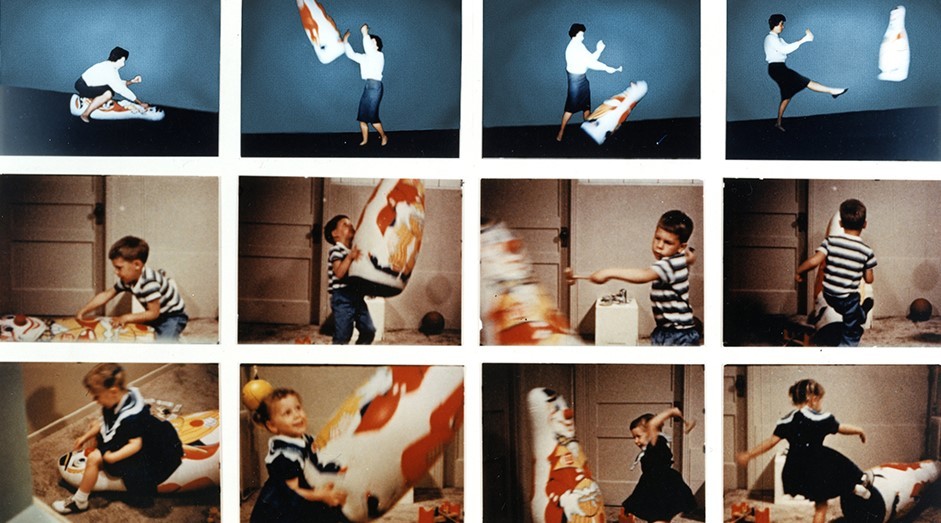 Similarly, as aforementioned, many are quick to blame the level of violence that is present in the video games, movies and TV in general. According to some, those kind of games and movies are teaching children (that will later become adults capable of owning a gun) from a very young age that violence is an appropriate (sometimes even the only one) solution to a problem. This premise, however, doesn’t take into account that nowadays children all over the world play the same games and watch the same movies, and yet shootings of this kind do not happen in other countries (as often). Furthermore, around 122 million of American adults (legally) own a gun [source], and yet a vast majority of them does not use that gun to shoot up a school. Alongside that, many studies have been conducted in order to detect the effect violent video games have on children, but the results are oftentimes inconclusive [source]. With that in mind, it is obvious that just seeing a news report about the shootings on the news, watching and playing violent movies or video games is not enough for one to decide to imitate this behavior.

Therefore, in order to understand the actions of these individuals, one also needs to take into consideration what kind of people they are, not just what have they been taught. According to the “frustration – aggression – displacement” theory, every act of aggression is, on some level, a product of individual’s frustration. Based on this theory, it’s the frustration that is the main cause of aggressive behavior, while the “displacement” part refers to the fact that an individual who is frustrated with an aspect of his life he can’t control or change, will find a different avenue to “take that frustration out on”. For instance, a person frustrated with the government’s decision to legalize gay marriage will see shooting up a gay club as a perfect way to take his frustration out, and in the meantime also “send a message”. However, there are of course countless individuals that feel frustrated with many aspects of their life and yet do not end up taking that frustration out on innocent children or unarmed party-goers. 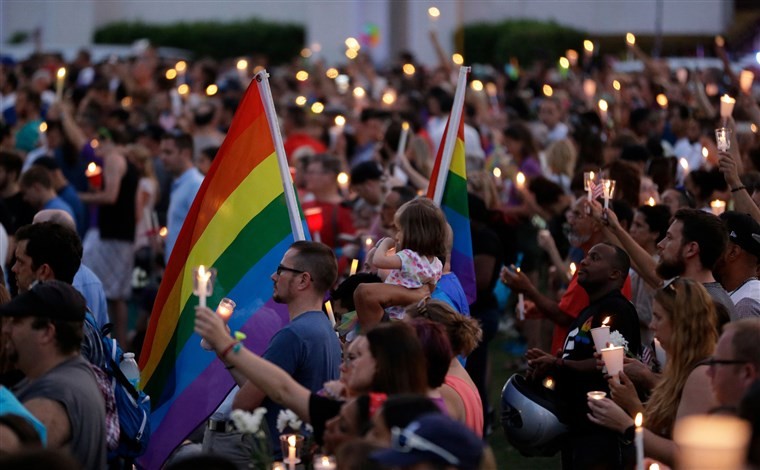 By just taking a look at two of the most cited aggression theories in psychology, it is obvious that one theory could never explain this phenomenon in full, or promise a perfect solution for it. On the other hand, if we combine the mentioned theories it is plausible to conclude that the shooters in any of the tragedies might have never chosen that kind of avenue to resolve their frustration if they hadn’t previously read up on others doing the same before them. If this is the case, the simple act of not giving the shooters ‘the fame’ they might have been after seems like an easy one to do. Especially if there is a possibility it could lead to these tragedies, if not never repeating again, at least happening less often. The question is, why so little news reporters opt for it then. Nevertheless, there is no denying that school shootings in particular seem to be exclusively an “American problem”, as illustrated in the picture below. 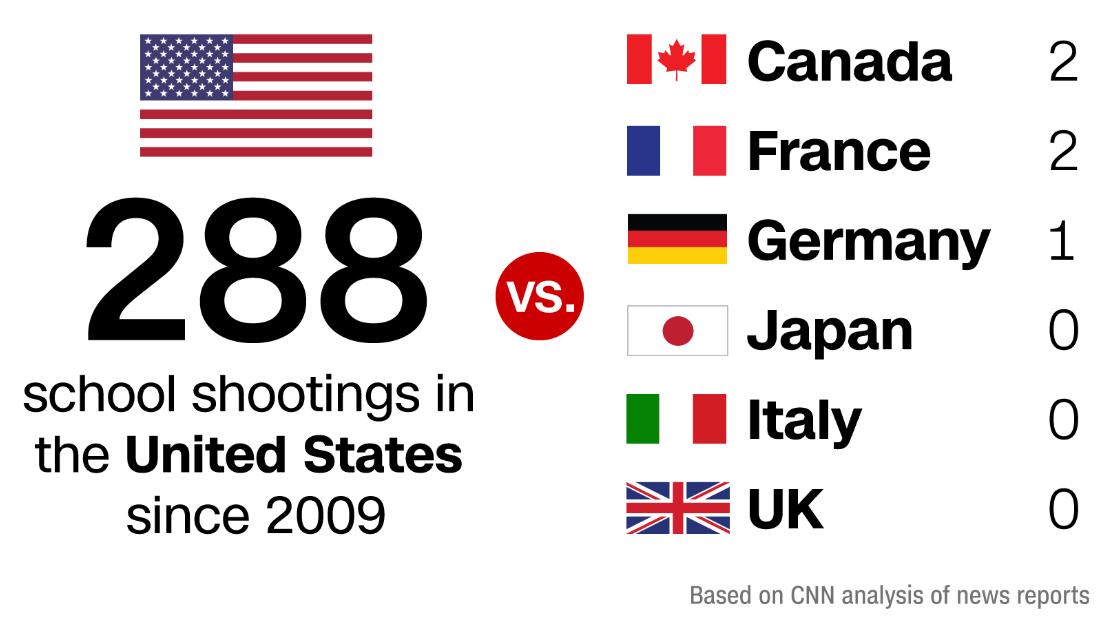 When it comes to school shootings in particular, many are quick to blame the culture of bullying that seems to be virtually unstoppable. According to this premise, the individuals that commit such acts are people who were so brutally bullied that they were “driven” to committing this act as a way of finally taking back control, or perhaps deciding to “destroy” the building where they were tortured. Although many shooter’s personal histories do indicate that this theory might be one of the most relevant ones, it still doesn’t account for the fact that children are (unfortunately) bullied every day all over the world, not just the USA. So – why the USA? Why is this phenomenon so prevalent in this country in particular? The country that is one of the most developed ones in the world and whose citizens, consequently, should not have to fear that sending their children to school might lead to their death. Is it possible that the sheer accessibility of guns in the USA the main, if not the only, cause? Or perhaps the issue runs deeper than that?

The possible explanations of the exclusivity of this phenomenon will be covered in a future post.