What is marital rape and why does it remain hidden?

Many people believe that a woman cannot be sexually assaulted by her intimate partner or husband and that sexual perpetrators are persons unknown to the victim. This is often described as one of the myths of sexual violence against women. The feminist organizations, such as Women’s Room, emphasise that the majority of perpetrators of rapes and other types of sexual violence are someone known to the victim. In 80% of the rape cases, women know the rapists, and almost half of them (45%) are their intimate partners. Most rape cases (regardless of whether the perpetrator is known or unknown to the victim) are not reported (Allen, 2007; Kilpatrick, Edmunds & Seymour, 1992). There is some evidence that the rape cases in which the perpetrator is a husband or a cohabitation partner are being less reported than the cases when the rapist is a stranger. Considering this fact, it is important to focus more on the issue of marital rape, trying to better understand reasons for keeping this kind of domestic violence hidden. 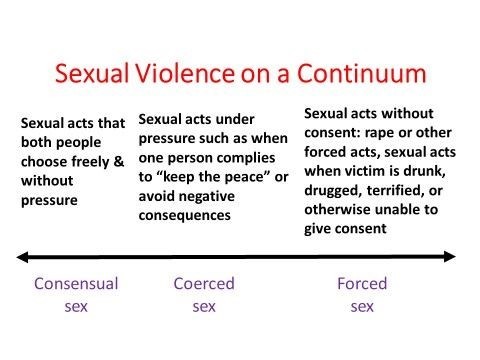 Lisa Fontes: Sexual violence occurs on a continuum from less to more violent.

The term forced sex refers to sexual acts without women’s consent, it includes rape and other forced sexual activities. Another type of unwilling sex is coerced sex which includes sexual acts under pressure and against women’s will, pushing women on sex, often by ignoring her verbal resistance. The difference between two types of unwilling sexual activities relies on the presupposition that women can be coerced into sex without being physically forced; for instance, it can happen as a result of verbal, emotional pressure. Some abusers coerce sex by threatening to be unfaithful or by depriving women of needed resources, such as money and food. They can use other means of forcing as well, such as threat to use physical force. These are all means that perpetrators use to control their victims. One of the approaches that can be helpful in understanding the ways perpetrators control women is the concept of coercive control introduced by Stark (2009). According to the concept of coercive control, woman can be controlled by her partner in different aspects of life, such as the way she speaks, dresses, works, as well as in sexual life. Some of the examples of coercive control are assaults, threats, humiliation and intimidation of a woman which are all means that perpetrator uses to harm, punish or frighten her.

There is the evidence that marital rape is experienced by 10% to 14% of all married women and 40% to 50% of battered women (Martin, Taft & Resick, 2007). A few questions arise now, and one of them is whether or not sexual violence between intimate partners is less serious than violence committed by person unknown to the victim. Why are people in general less sensitive to the rape and other types of violence that occur between intimate partners, when compared to the violence that occurs between strangers? Which understanding of rape we want to adopt; does the rape include all unwilling sexual acts or is limited to those sexual assaults that are committed without women’s consent? If marital rape deserves more attention, what can be done to better understand women’s experiences, reasons for not reporting and leaving this kind of violence hidden?