School violence is generally interpreted as a physical, verbal, psychological or another form of violence to which the student is exposed by other students or teachers in the school environment. The fact that teachers can also be victims of school violence is rather neglected. The case of Franjo Dragičević, who, after being hit by chalk, pushed one student and allegedly slapped another, drew attention to Croatian teachers as victims of school violence. This case was an incentive for other teachers to share the negative experiences they had in interaction with their students and their students’ parents. However, this phenomenon is not only characteristic for Croatia but occurs in different countries of the world and is increasingly becoming a focus of scientific research.

Teacher targeted bullying is defined as „a communication process that involves a real or perceived power imbalance where a teacher is subjected, by one or more students [or their parents], to interaction that he or she perceives as insulting, upsetting or intimidating; this may be verbal, nonverbal or physical in nature, it may be premeditated or opportunistic, be a single instance or recurring and or of short or long duration" (Kauppi and Pörhölä, 2012, in Billet, Fogelgarn, Burns, 2019, 8). 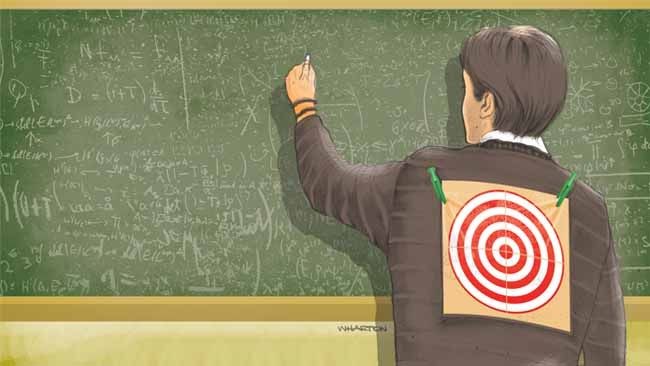 Teacher targeted bullying is a global problem, with numerous international evidence showing that this type of violence is not uncommon. In the USA, a study of 2 998   kindergartens through 12th-grade teachers revealed that 80% of teachers reported at least one victimization in current or last year, and 94% of these teachers reported being victimized by students (McMahon et al., 2014). In Slovakia, 49% of 364 surveyed teachers have had negative experiences with student’s violence in the period of the last thirty days (Dzuka, Dalbert, 2007). In Luxembourg, 23.9% of teachers reported being a victim of strong verbal attacks, 19.4% of perceived defamation, 7% of sexual harassment and 4% of physical assaults (Steffgen & Ewen, 2007). In South Africa, 62.1% of 153 public secondary school teachers reported exposure to verbal bullying, 34.6% to physical bullying, 27% to indirect bullying, and 6.6% to cyber bullying (Woudstra, van Rensburg, Visser, Jordaan, 2018). In Australia, 80% of 560 teachers experienced some form of student or parent bullying over the last 9 to 12 – month period, with 55.6% of teachers reported bullying from both students and parents (Billet, Fogelgarn, Burns, 2019). Teacher targeted bullying was also recorded in countries where the cultural context traditionally has taught students to deeply respect teachers. In Taiwan, 30% of students reported engaging in at least one aggressive act against the teacher last year (Chen & Astor, 2008, cited in Billet, Fogelgarn, Burns, 2019).

As for Croatia, Lokmić, Opić and Bilić (2013) conducted a study that included 175 teachers from five primary and five secondary schools in Zagreb. The results revealed that 74.3% of teachers have experienced violence from their students during the last year. Of those who had experienced violence, 28% experienced it once in a year, 15.9% once a month, 21.3% once a week and 9.1% on a daily basis. The study conducted by Golub, Olčar and Bezak (2016) on a sample of 209 teachers revealed that half of them (54%) have experienced some form of violence from students, with 51% being exposed to verbal violence, 7% to physical violence and 16% experienced personal property damage. Also, 12% of teachers have been exposed to parent violence, with 11% being exposed to verbal violence and 1% experienced personal property damage by parents.

No matter what form it takes, violence against teachers has a negative impact on teacher’s self-confidence and self-esteem, it hinders their work performance and satisfaction, and it makes it difficult to create a positive atmosphere in the classroom, with all of this influencing the development and success of students (Lokmić et al., 2013).

The mentioned negative consequences are the reason why it is important to take steps to ensure that teachers are provided with a safe environment. The general public should also be aware that cases with teacher targeted bullying, like the one at the beginning of this text, are not isolated incidents but they occur on regular basis in almost all our schools.